Picture this: a group of nursing students have met at a diner, quietly trying to study about poop and vomit and all those delicious topics.  I’ve met up with some of my friends from school who I feel like I never see, and half the time we’re studying, half the time being ridiculous and catching up.  And eating pastrami ruebens.  Throughout my study session, my husband is sending me random texts that his stomach hurts, and I’m telling him to buck up and drink some ginger ale.  Then comes a panicked phone call.  He can’t bare the pain – it’s the worst he’s ever felt.  He can’t breathe, he can’t feel his finger tips.  I call my mom to head over, and I make it home in record time.

The ride to the hospital was the longest I’ve ever experienced.  The pain is coming in waves, and in between the peaks I’m trying to distract him.  I imagine this is how fathers feel as their wives are in labor.  It’s one of the coldest nights we’ve had in decades – well below zero – and I’m trying to also be mindful of black ice.  Finally we make it to the ER and it’s actually quiet.  We are in to a room quickly and have the nurse all to ourselves.  I try to joke with him about studying gallbladder infections while my husband has one, but he doesn’t really care.  My husband gets one dose of pain medication and is feeling a little better, all in all he got three.  This is what he looks like on pain meds! 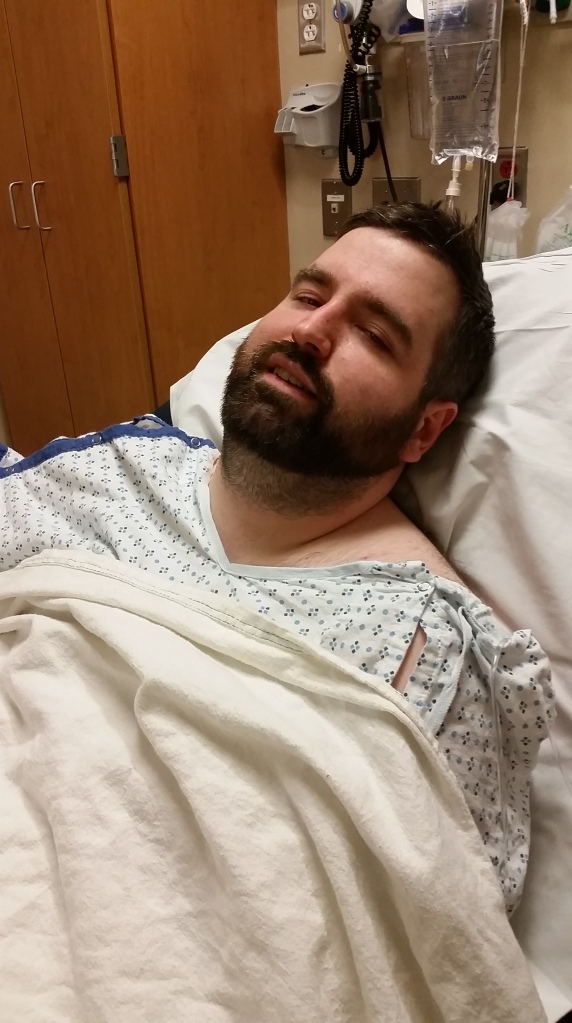 So overnight in the ER we saw some surgeons, because his ultrasound showed stones and sludge in his gallbladder (duh).  Sometimes this pops up for no reason, sometimes weight loss can trigger it.  Hubby has recently lost a little over 30 pounds, so this is a crappy prize for that!  The surgeons decided on surgery the following morning after an antibiotic dose, so we were off to the floor.

Cut to surgery: I had run home because I thought I had time before his 11:15am surgery, but he was bumped up to 9:30.  Some how I made it and had a lovely talk with this pre op nurses.  They  and the surgeon assured me it would be quick – 60 to 90 minutes – and I could see him in the recovery (PACU) unit.  In my OR rotation two semesters ago I actually saw the surgery he was getting, so I knew exactly how it would go. They do it laproscopically, unless they can’t get the gallbladder out that way, so they blow the abdomen up with CO2.  This makes you kind of uncomfortable for the next day or so.  I was fine in the waiting room distracting myself, until 90 minutes was up.  Then I freaked.  I knew he should be done and I was imagining the worst.  Then they called a rapid response to the PACU and I completely lost my mind.  Needless to say, after we were finally ready to leave the surgical area and go back to the unit, I had to apologize to the secretary and a nurse for my crazy behavior.  I explained I was operating on no sleep, and I knew too much about what could go wrong.

When we got back to the floor, Josh was exhausted and miserable, but we both had the same goal: get him home.  There was a snow storm coming in, but isn’t everyone more comfortable at home?  He had three tasks to get home: stand, drink, and pee, all without trouble or nausea.  After another antibiotic dose, 3 laps around the unit, and 2 pitchers of water, all with some naps in between, we had all three and we could be released!  Here’s the tired man in between my slave driving.

I’m so thankful for my friends and my family!  My mom and dad watched Harry, and they both rallied even though my mom’s pipes froze at home and that had to be taken care of before they burst!  I just put both my little and big men down for their afternoon naps, so I’m off to enjoy some Mom time.  I’ll try to get another blog post in later, but if not, Happy Mardi Gras!

One thought on “The Gallbladder Attaaaaacks!”